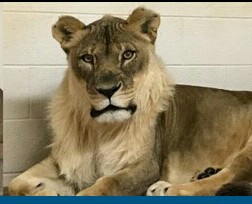 
The Lioness named Bridget has been put to mercy death due to suffering from heart failure Wednesday after a veterinary team. The zoo says Bridget had been lethargic, not eating and appeared to be in pain as its becoming unbearable for her. She has been a good ambassador for the zoo.


Last month, the zoo said Bridget appeared to be in good health after lab results explained why she had grown a mane, which is usually only seen on male lions.

The testing found that Bridget had an elevated level of androstenedione, a hormone that can contribute to developing male features. The zoo says that suggested a tumour in an adrenal gland may have been the cause.


Let's morn and pay tribute to her with hashtag #RIPBRIDGET
Email Post
Adeymola
I am a Copy writer, Blogger, digital marketer, social media manager, volunteer, and project manager currently living in Enugu, Nigeria. My interests range from writing to volunteering. I am also interested in Wildlife, photography, and web development.